James Pleat now joins an elite group of golfers who have won the title two-straight years as he defeated Brandon Gillis 5 and 4 in the 36-hole final match of the 118th New Hampshire Amateur Championship held at North Conway Country Club.

Pleat and Gillis set out in the final match, both looking to make history for themselves. Gillis actually got the quick 1up lead over Pleat on the second hole by sinking his birdie putt, but Pleat tied it on the 6th hole with a birdie himself, done by chipping in from just off the green. From there, they either traded or halved holes until the 16th hole on the first 18.

Gillis got himself into some trouble by making an unforced error on 16 at North Conway by hitting his second shot over the green and could not get up and down. Pleat tied the match on 16 and went on to win the 17th and 18th holes to end the first 18 with a 2up lead.

“I felt pretty comfortable, but a 2up lead is basically like not having a lead at all, especially with a player like Brandon,” commented Pleat after the match. “We were trading a lot of birdies early on in the round on the first 18 and he was up for most of it. And the turn around on 16, 17 and 18 was huge.”

The break after the first 18 hole was likely beneficial to Gillis, and he hoped it would stop Pleat’s momentum that he had going. The two tied the first three holes of the second 18 but Pleat began to expand his lead more with a birdie on North Conway’s 4th hole, the match’s 22nd hole. He then got to 4up with another birdie on the course’s 6th hole.

We have a winner! Congratulations to James Pleat on winning his second-straight New Hampshire Amateur Championship.

He defeated Brandon Gillis 5&4 to take the win! #NHAmateur pic.twitter.com/ER3X3L7Nu5

He was doing just that, but Gillis wasn’t going to let him have the win so easy. Gillis won the 25th hole of the match, but by the time they finished the 30th hole, Pleat worked his way to a 6up lead with 6 holes left. Gillis made one last effort at it, sticking his tee shot on the 31st hole, North Conway’s 13th hole, winning the hole but needed to keep winning holes to extend the match. Pleat closed it out on the 32nd hole of the match, winning 5 and 4.

Throughout all of match play, including the final match, Pleat had his father, Phil, caddying for him. James reminisced back to 2001, the last time the State Amateur was held at North Conway saying, “Having him in the cart was really cool. When he was playing here in 2001, I was in the cart with him. I didn’t give him as much advice, but it was cool to have that little role reversal going on this year.”

He said, “My dad was super helpful to have out there to keep me focused and offer his advice. He was definitely a calming presence.”

With this win, Pleat now joins an elite group of golfers who have captured the State Amateur title two years in a row. He is following in the footsteps of New Hampshire Golf Hall of Famers Bob Mielcarz and Thomas J. Leonard, Jr, James’ grandfather, who have both accomplished this feat. He is also on his way to keeping up with his own father who has three State Amateur titles himself. It really is a special win for James and the entire Pleat/ Leonard family.

“It’s pretty amazing,” said Pleat. “I never thought this would happen. I feel like its hard to do now because we have a lot of really good players in this state.”

ABOUT THE New Hampshire Amateur 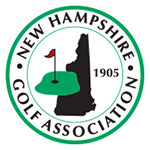 Competition will be held at ten pre-qualifying
sites and will be 18 holes at Stroke Play.
The
low qualifiers and ties from all the sites
along
with the players exempt from
prequalifying, will
be eligible for the 36-hole qualifying on
the
first two days of the tournament proper.
Sixty-four players will begin match play the
following day. Entries are open to males
who
are members in good standing of member
NHGA
Clubs who are legal residents of New
Hampshire. An eligible non-resident can
play in
NHGA Championships if he has been a
member
in good standing of an NHGA member club
for
the last three complete golf seasons and
has
played a minimum of 25 rounds of golf at
this
club in each of the three seasons. A letter
signed by the President of the member
club
must accompany his first entry, stating
that
the player complies with NHGA eligibility
requirements.